A Bright Spot in the World Economy 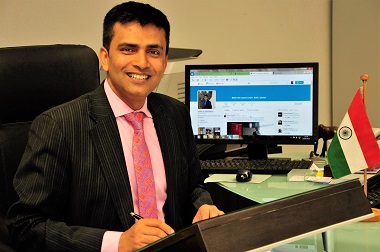 India is known as an exciting and dynamic place to conduct business, drawing investors from all over the world, the Republic of India is one of  the fastest growing economies. But what exactly can be learned from the Indian experience, and where do we go from here? Mr. Raveesh  Kumar, who assumed leadership as Consul General of India in Frankfurt in 2013, offers his his insights on the favorable investment climate,  significant reform measures, and the strengthening of Indian-German relations.

GSC: Mr. Kumar, congratulations to the 67th anniversary of the Republic of India.  Since then your country became one of the largest  growing economies of the world. It has been ranked among the top attractive destinations for inbound investments. Why is India a  good place to invest for foreign companies?

Investment by companies in another country is a strategic decision to ensure future growth prospects, cut down on production costs, become   competitive, and get good returns on their investments. India, with the second largest population in the world, a growing middle class population, a favourable demography, a stable government, thriving democracy, competitive and skilled labour, rule of law, free press and an independent judicial system offers a conducive environment to foster growth and development. In recent times, India offers a favourable investment climate with excellent prospects for foreign companies who would like to come invest in India.

To facilitate ease of doing business, several reforms measures have been announced. Foreign Direct Investment rules have been liberalised and more sectors have been opened up for investment. We have made our regulatory regime more transparent, responsive and stable. We have reduced the complicated procedures, making them available at one platform. Our forms are being simplified. Infrastructure development is being given a boost by planning investment in railways, roads, urban development, waste management and ports. We are particularly keen to scale up investments in next generation infrastructure. This includes roads, ports, railways, airports, telecom, digital networks and clean energy. Fifty of our cities are ready for setting up Metro Rail Systems. Several steps have been taken towards administrative reform. Transparency has been introduced to ensure corruption free governance. We began the exercise of identifying unnecessary laws and repealing them. We are building a tax regime that is predictable, stable and competitive. The Government is working towards implementation of GST (Goods & Services Tax) to avoid multiple layers of taxation and make India a competitive destination for investment.

India is today a bright spot in the world economy and is already the fastest growing large economy in the world. Our macroeconomic indicators are stable. I feel that this is the right time for foreign companies to engage with India.

GSC: India has been known as very strong in the IT industry with a huge asset of software developers and engineers. But this is not the only industry which is already strong and growing. The recent initiative of the Indian Government „Make in India" is focusing on 25 sectors. Which industries are particularly attractive in India for foreign investors from your point of view? And for what reasons?

The 25 sectors identified under the ‘Make in India' initiative are only indicative in nature. The choice of a particular sector for investment depends on the strength of a country/company and also their assessment of Indian market for a particular industry. For example, in the case of Germany, the priority sectors would be the one where Germany has inherent strength like automobile, auto-components, renewable energy, skill development, urban development, railways, cleaning of rivers, defence, infrastructure, waste management, medical devices, pharmaceuticals, electronics, agriculture, food processing and many others where the strength of Germany meets the requirement of India.  In the last 2 years of my tenure here, I have personally visited more than 50 companies in this region ranging from the sector of food processing to waste management and from household appliances to dairy technology. So, I would say that opportunities are available for German companies in several sectors. I would specially like to invite the Mittelstand and the family-owned businesses to come forward and place their trust in the Indian market.

GSC:  Shortly after taking office in Frankfurt in September 2013 you launched the India Business Forum to connect businesses and experts from India with Indian companies and professionals already established in Germany. What else does the Consulate undertake to strengthen the trade relationships between Germany and India?

Strengthening economic and commercial relationship between India and Germany is one of the priority areas of the Consulate. Our main focus has been to take the message of political and economic transformation of India to German businesses. Towards this objective, we have partnered with IHKs of different cities and regions to organise specific events. We are working very closely with the IHKs in Frankfurt, Dusseldorf, Mainz, Cologne, and also small cities like Darmstadt, Kassel, Bonn, Bielefeld, Bochum, Trier and others. We organise events on specific topics of interest to the German business community in that region like Smart cities, skill development, cleaning of rivers, renewable energy, etc. through which we aim to inform them the requirements of Indian projects. We are also working together with other economic organisation and consultants to strengthen our economic relations.

Our focus is also to work with Ministries to encourage business delegations to India. I am happy to inform that Economic Minister of Hessen Mr. Tarek Al Wazir visited India in November leading a large business delegation. We expect a Ministerial delegation from RLP to visit India later this year.

GSC: The Consulate General of India in Frankfurt is responsible for the states of Hesse, North Rhine-Westphalia, Rhineland-Palatinate and Saarland. What services or assistance does the consulate provide to businesses and investors who want to be active in India?

In addition to providing regular consular services like business visas and other such assistance, on case to case basis we provide guidance to German business and investors regarding any doubts or questions they might have regarding investing in India and direct them to the right authorities. In this regard, an effort by the Embassy of India in Berlin is mention-worthy- the Make in India Mittelstand project where we provide umbrella services to the selected companies to start their business operations in India.

GSC: Last but not least a general question about the business mentality in your country since our readers are not only from Germany but also from Turkey, Brazil, China, Russia, South Korea among others. What is the key for success in India according to you and which suggestions do you have to business people who want to invest in India?

I feel that there is no single key or formula that can lead to success in India. My advice is to prepare yourself well before you enter, which I believe is true for engaging with any country. Do not go with a fixed mindset and be flexible. Be mindful of inter-cultural differences. And above all, have faith in our ability to deliver. India is the fastest growing economy of the world. It is no longer a choice to invest in India; the question is when and how.

GSC: Thank you for your Interview, Mr. Kumar.